The U.S. Government issued a report on Climate Change Impacts in the United States, as part of the U.S. National Climate Assessment of the U.S. Global Change Research Program from 2014.

In the report’s chapter on Energy, water and land use, the authors share fundamental messages, last but not least on how these elements interact in many ways, how the dependence of energy systems on land and water supplies will influence the development of these systems and how they need to be jointly evaluated with regards to risk, vulnerabilities, and opportunities. The chapter on Energy, water and land use is taking a holistic approach in evaluating its impact on climate change looking at the different regions in the U.S.

The report looks at water use for electricity generation by fuel and cooling technology (unfortunately it does not provide data for geothermal), but in another element it provides a rather interesting fact and that is the “project land-use intensity” of the different energy technologies.

In the report, it says that “challenges in siting land- and water-intensive energy facilities are likely to intensify over time as competition for these resources grows.”, and that “Considering the interactions among energy, water, and land systems presents opportunities for further identification and implementation of energy options that can reduce emissions, promote resilience, and improve sustainability.

“Every option for reducing greenhouse gas emissions involves tradeoffs that affect natural resources, socioeconomic systems, and the built environment. Energy system technologies vary widely in their carbon emissions and their use of water and land. As such, there are energy-water-land tradeoffs and synergies with respect to adaptation and mitigation. Each choice involves assessing the relative importance of the tradeoffs related to these resources in the context of both short- and long-term risks.” 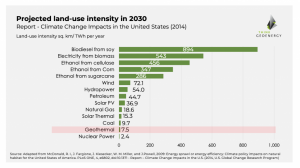 In the figure shared above, the report shows the “illustrative projections for 2030 of the total land-use intensity associated with various electricity production methods. Estimates consider both the footprint of the power plant as well as land affected by energy extraction. There is a relatively large range in impacts across technologies. For example, a change from nuclear to wind power could mean a significant change in associated land use. For each electricity production method, the figure shows the average of a most-compact and least-compact estimate for how much land will be needed per unit of energy. The figure uses projections from the Energy Information Administration Reference scenario for the year 2030, based on energy consumption by fuel type and power plant “capacity factors” (the ratio of total power generation to maximum possible power generation). The most-compact and least-compact estimates of biofuel land-use intensities reflect differences between current yield and production efficiency levels and those that are projected for 2030 assuming technology improvements.”

The messages is clear, geothermal is the least land-use intensive renewable energy technology, just surpassed by Nuclear Power. With 7.5 square km per TWh produced, geothermal clearly shows its less impactful use of land with solar thermal using double the land per generated TWh of electricity, solar PV nearly 5 times as much and wind power nearly ten times as much.

The report can be downloaded here. The chapter on Energy, water and land use can be found on the pages 258 and following.